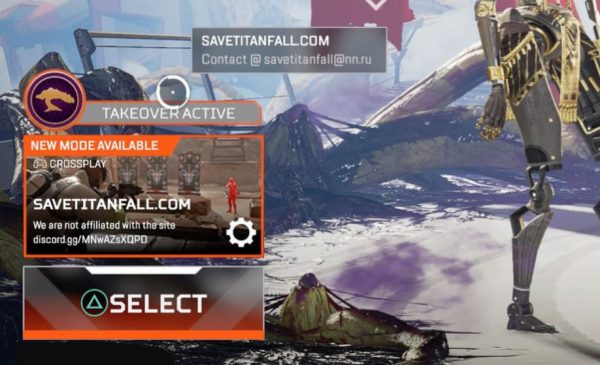 Apex Legends has had a bit of rough weekend. The game’s various playlists have been taken over by hackers, who removed their official descriptions and replaced it with messages urging players to “save Titanfall”.

The hacked messages were initially limited to PC, but later spread to PlayStation and Xbox, according to Alpha Intel. The messages also advertised a website – SaveTitanfall.com, though hackers say they’re not affiliated with the website.

When this happens, hacked playlists become inaccessible, preventing most from playing Apex Legends. This was particularly frustrating in the US because of the Fourth of July long weekend.

The issue hackers are trying to amplify has been affecting both Titanfall games for months. Titanfall games have been under constant DDoS attacks. Though these problems make the games’ multiplayer unplayable, they’re even more catastrophic in the case of Titanfall 1, whose “single-player” campaign requires an internet connection to be played.

Players affected by the hack are unable to queue for any other game mode.

The website accuses EA of “fraud” for selling Titanfall while it’s “unplayable.”

The site in question pleads with EA to solve the issue once and for all, or stop selling Titanfall to new players. Some of these DDoS problems did spill over to Apex Legends, but they’re usually taken care of more swiftly. The delay of the fix for Respawn’s legacy titles has some complicated reasons behind it, so it’s not something that could be easily fixed, seemingly.

Respawn has since responded on Twitter, initially saying that it’s investigating the hack. Following hourly updates, the developer confirmed that Apex Legends’ matchmaking is back to normal, and that everyone can once again enjoy the game.

We’ve confirmed that matchmaking has been restored. We’re keeping an eye on things but believe the issue to be resolved.

Thanks for your patience, Legends.